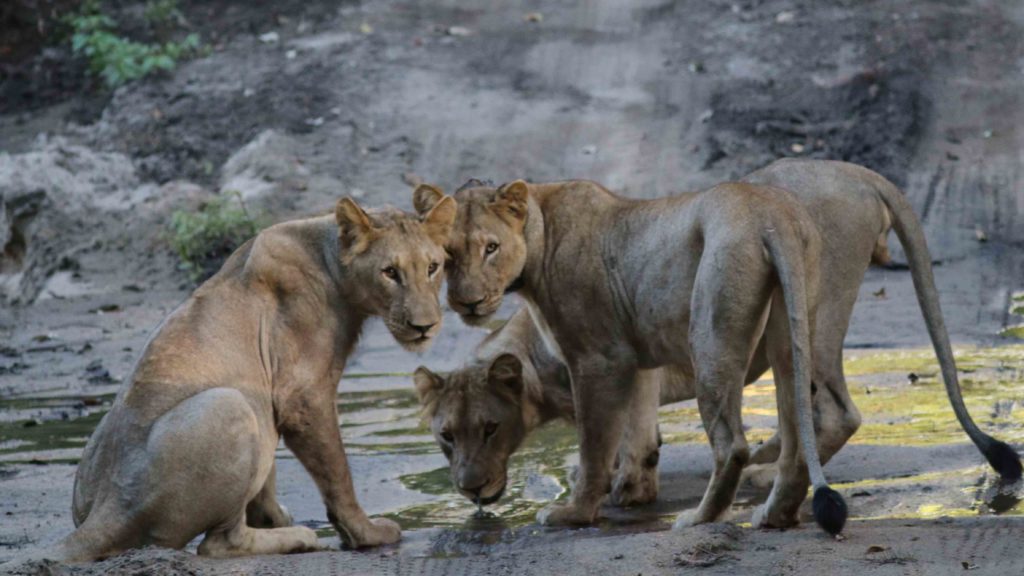 The state of the environment is staggeringly dire. We’ve pushed millions of animals to extinction and those that remain are at their lowest numbers since the dawn of the human age. The plight of our planet, to which we are indelibly connected, is so pronounced that it’s resulted in eco-anxiety, recognized by the American Psychological Association as a growing mental health concern. With over a million species facing extinction in the next five years, it’s understandable that you want to turn away from these reports, too overwhelmed to read another sad conservation story. So we won’t tell you one.

There are those among us who quietly get on with the business of saving our precious, beautiful wildlife. It’s a slow process—a war of attrition against armed poachers, apathy and pollution on a grand scale. In Africa, at least, they are slowly getting the upper hand. This is the story of one organization that is changing the natural order of things.

African Parks (AP) is a non-profit conservation organisation that partners with local communities and governments to assume the rehabilitation and long-term management of national parks. They currently manage 15 national parks in nine countries covering 10.5 million hectares.

“We partner with the local government to secure a long-term mandate,” says Slabbert. “Secondly we secure funding through our donor program. Next, we establish infrastructure like roads, air support, communications, internet etc. We establish area integrity by instituting law enforcement. We put boots and rifles on the ground to push back in areas controlled by militias and to prevent poaching.”

AP does have to institute regional stability, but they resist the implementation of fortress conservation, opting instead to partner with local communities. AP focuses on local economic development and poverty alleviation in surrounding communities alongside its law enforcement activity to ensure regional stability. “The most important pillar is all about community; we work with the surrounding villagers to establish a regional constituency of support,” Slabbert explains. “When we have that, we have a conducive environment for restoring ecosystems, reintroducing animals and developing robust enterprises.”

AP’s stated goal is to manage 20 parks by 2020, protecting more than 10 million hectares of African wilderness and the animals that call it home. Majete’s story is one that is familiar to the AP family.

Majete Wildlife Reserve is a 700 km² park in Malawi has been an AP project since 2003.

“Majete was established in 1955. There were many animals until the last elephant was killed in 1990 and, by the year 2000, most of the animals were gone,” says Gervas Thamala, field operations manager. All that remained of the once pristine park were a couple of antelope. Hunting, poaching and grazing had decimated the animal population. Majete was a wasteland.

“When African Parks came in to help, there was much work to be done and the first task was to train the rangers and build a fence,” says Thamala. “The fence was there to protect the animals and to protect the people and their crops.”

Installing a fence is a vital first step, but with the mammoth task of erecting 144 km of fencing in a remote area, it was two years before the fence was complete. Building fences is a necessary step in conservation, but it does run the risk of alienating the local villagers who utilized the park for hunting and grazing their livestock. “We engaged with the community that surrounds the park because it was our understanding that even if we bring in all the money and the resources and we don’t work with the communities, we are not going to make a lot of progress,” says Thamala.

“People from the community were killing the animals, but slowly they came over to our side. Some of the people had firearms and they surrendered them,” Thamala Explains. “We continued to reach out to those who did not surrender their firearms through community awareness campaigns. We also gave them amnesty and collected around 500 firearms from the community.”

The firearms are homemade muzzle loaders. The stocks carved from local hardwoods, and the firing mechanism a rudimentary pin connected to a spring. The muzzle itself is a length of plumbing pipe. Construction rebar is cut into small pieces and filed to use as bullets and powder is made from a mixture of match heads and tree bark.

Rangers cleared the park of thousands of wire snares and gin traps to secure the area. Slowly, animals were reintroduced. First came the antelope and buck, then the rhinos arrived in 2003, elephants in 2006 and leopards in 2012 with lions following in 2013 when the herd numbers had swelled enough to support predators.

Since then, the park has thrived. The population of animals growing exponentially and the forests restored. “We brought in 217 elephants but the population quickly grew up to 450. This was so successful that, in 2016, we thought that population was exceeding the carrying capacity of this park which is 300,” said Thamala. “We captured 154 elephants and 345 other animals and sent them to Nkhotakota Wildlife Reserve in the north of Malawi. The animals that have grown in population are the antelopes like the waterbuck. We started with 300 and we now have 1800. We are sharing these animals with other parks too.”

“Doesn’t this give you hope for the future?”  asks Majete Park Manager, John Adendorff. “The fact that the elephant population grew so much that this park that was totally barren is now sharing it’s abundance of wildlife with neighboring parks.”

Majete is living proof that it is not too late to preserve our wildlife populations. It’s an inspiring story of a park reduced to a wasteland devoid of animals that has been revived and now serves as a sanctuary for animals and a life-source for the local community too. And it’s here that the AP script varies from other management policies. Parks cannot work in isolation; they must embrace local communities if they are to survive.

From the outset of the Majete project, community leaders were consulted and engaged in the process of revitalizing the park. A camp was built in the Reserve that provides accommodation to local tourists. All proceeds from this camp are reinvested into the community. One of the most successful projects is Honey with Heart, an initiative that provides hives to locals and training on how to use them. A tree-planting initiative provides shelter and food for the bees and firewood for villages.

Honey from the farmers is collected and the farmers are paid on the day of collection. The honey harvests are consolidated, processed, packaged and sold at a profit. These funds go straight back to the community where they have already contributed towards paying for a clinic, two school blocks and housing for teachers. Project funds are used to improve roads in the area while the park provides employment for locals too.

Continuous community outreach, education and upliftment has resulted in unreserved support for the park. “We have not lost a rhino or elephant to poaching and the villagers help with security by reporting any suspicious individuals in the area. Instead of fighting them, they are helping us now,” says Thamala. “In Malawi, Majete is the place to go. From zero animals, we are talking of more than 13,000 animals. Last year in September we did an aerial count and we counted 12, 500 but there have been many offspring in the last 6 months so we are confident to say over 13,000. That is a big achievement.”

With 15 parks under the belt and four more in the pipeline, AP is well on the road to achieving their goal of 20 parks by 2020. So, what happens now?

“It’s this incredible success story, it’s one of the few good news conservation stories in Africa. What we do is amazing and I’m really exhilarated to be part of the team that’s doing this. But we cannot stop there,” says Slabbert.  “Fifteen protected areas in Africa is significant, but there’s hundreds that need help. Its difficult to maintain this success and it’s a rational decision to consolidate, but it’s not a solution for Africa. We need partnerships and expansion and collaboration that sees multiple organisations working towards a common solution by leveraging resources to maximise impact.”

“Moreover, we need to embrace community involvement more, African Park’s success is that they have been conservation focused with a community development outcome. I think the future of conservation in Africa is the model flipped around,” explains Slabbert. “We should have a community focus with a conservation outcome. If the community are not included in the decision making around resource use, or maximising and sharing in the income potential of the parks, it could jeopardise their future and result in unsustainable pressure on natural resources. If we have a community centric focus and achieve a mutually beneficial conservation outcome, this will help us survive changing political regimes and mitigate the pressure of population growth in Africa and the pressures that places on the natural resources.”

One solution is to develop tourism to bring income into the park and provide employment and resources for the community. Majete Park Manager, John Adendorff understands this: “Majete is an incredible conservation success, but that is just part of the story. You’ve got a generation of people who know how bad the park was and who have benefitted from tourism and from the community projects that the park has initiated. The next generation won’t know how bad it was and we have to get them on board. We are striving to find other sources of income. By increasing tourist numbers, creating camping facilities and encouraging day visitors from Malawi, we are hoping to diversify our income streams.”

Tourism is not the silver bullet solution as it can only cover a portion of the costs of running the parks and providing resources for the local communities. One vision to longevity is developing the community projects like Honey with Heart into businesses that can provide an income for the expansion of conservation to even more parks while providing an income to Africa’s ever-growing population. AP has many successful projects already on the go; honey, moringa farming, fish farming, mushroom and caterpillar harvesting to mention a few. They need to partner with organizations that will turn those projects into viable businesses to see success and sustainability in the next 50 years.

“AP is this incredible success,” explains Slabbert. “It’s built on these very sound principles of getting the money and the mandate right, building the right infrastructure and an enabling environment. Restoring the habitat and building tourism and community relations. It’s fantastic. The real hope though, is that it’s an organization that recognizes that that is only part of the way there. It’s the first step and we cannot decide that that is our success and consolidate and stop. Now we need to continue building constituency. Now we embrace Africa, which is people, and now we need partnerships to scale and maximise impact.”