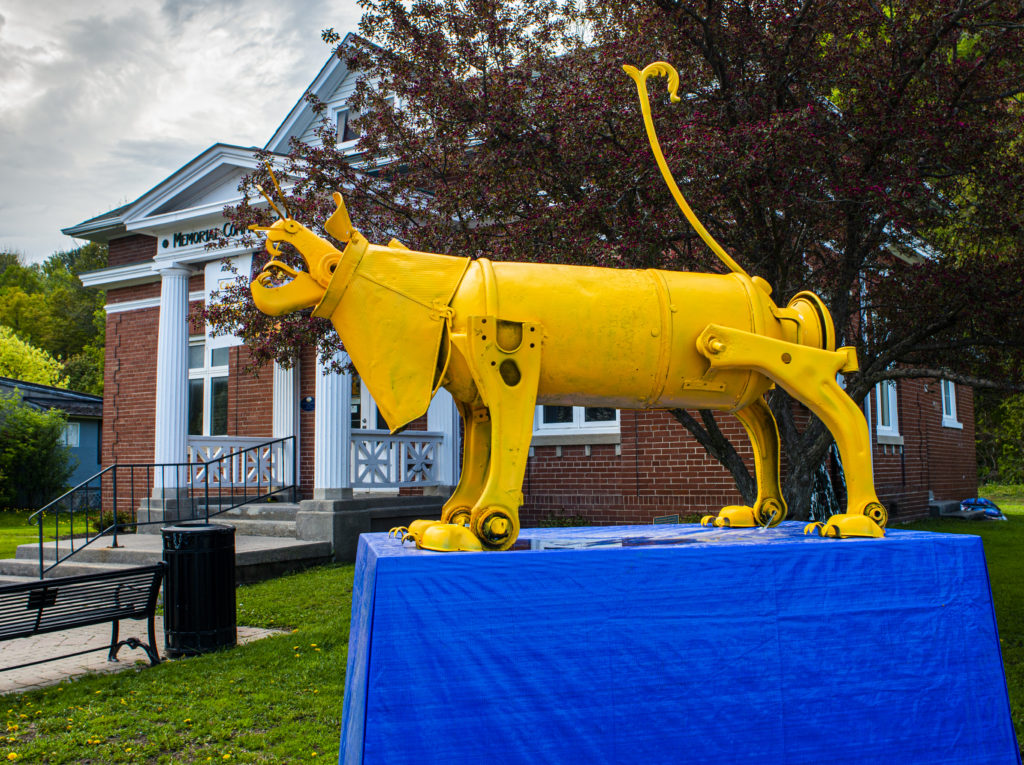 Blandford Gates is an artist who creates whimsical sculptures from scarp metal. He recently graced Warkworth’s Arts and Heritage Gallery (Ah!) with his curious collection of animals, which included a mouse and a lion on pedestals outside the gallery. The lion sculpture caused somewhat of an uproar as it was anatomically correct and this resulted complaints to the municipality.

The Ah! was instructed to conceal the appendage and was given a couple of days to remove the sculpture. Before they were able to comply, the sculpture was dismembered as vandals thoughtlessly damaged the piece. Police are investigating.

As a designated arts community, many Warkworth residents were saddened by the ‘cat’stration and rallied to express their support for Gates’ work. The visitor’s book is filled with complimentary comments from people who enjoyed the exhibition immensely.

The controversy over the lion’s genitalia is quite surprising to me. It was not my intent to offend. We are in farm country with large herds of animals displaying their reproductive gear for all to see. To go to a zoo, one is further exposed to examples of animal’s genitals. No attempt to cover up expressions of gender is made nor is there a warning given that one might be exposed to a very natural fact of life. It certainly was not my intent to offend. I only wanted to make a complete lion; paraphernalia and all. There is no attempt to cover up the reality of the different sexes in farms, zoos and even dog parks. There are lots of examples of sculptures around the world where both animal and human sex organs are fully expressed. In farm country this concern for the expression of an animal’s sexual organ is indeed a surprise.

The lion sculpture debate and vandalism is really unfortunate. Municipal staff received many complaints about the lion from residents who were offended by it and requested that it be removed. I will also say that we have received many comments and emails in support of the sculpture, which is great.

We did contact the Ah! Centre and passed along some of these complaints and requested that they move the lion to private property or even inside the building. Council is very supportive of the Ah! Centre and this was not an attempt to censor art, but rather to gain some control over the situation. Given this piece of art has become quite controversial by the public, it is not fair to install this on public property without the permission of the municipality. It was the Councillors and municipal staff that had to deal with the complaints, which of course we were not expecting or prepared for. It is disappointing that the sculpture was vandalized and this certainly is not something that the municipality condones. This was not the outcome that we had hoped for.

Going forward, the municipality is looking to develop a public art policy so that situations such as this can be avoided and the proper permissions and also protection of art in public spaces can be implemented.

Genitalia has often ruffled feathers in the art world. From the reduced sizes of the Greek heroes to the fig leaves of the Victorian era, naughty bits have had a checkered past.

As Canadians, we claim that ‘diversity is our strength’, although this is not the easiest of paths to tread. Diversity means we enjoy the input of many voices who challenge us and provide us with opportunities to grow. If everyone is exactly the same, there is no impetus to grow, to improve or to strive to be better. Freedom of expression is absolutely central to Canadian culture, even when those points of view are different from our own. Silencing those whose options we don’t agree with curtails everyone’s freedom in a dangerous way.