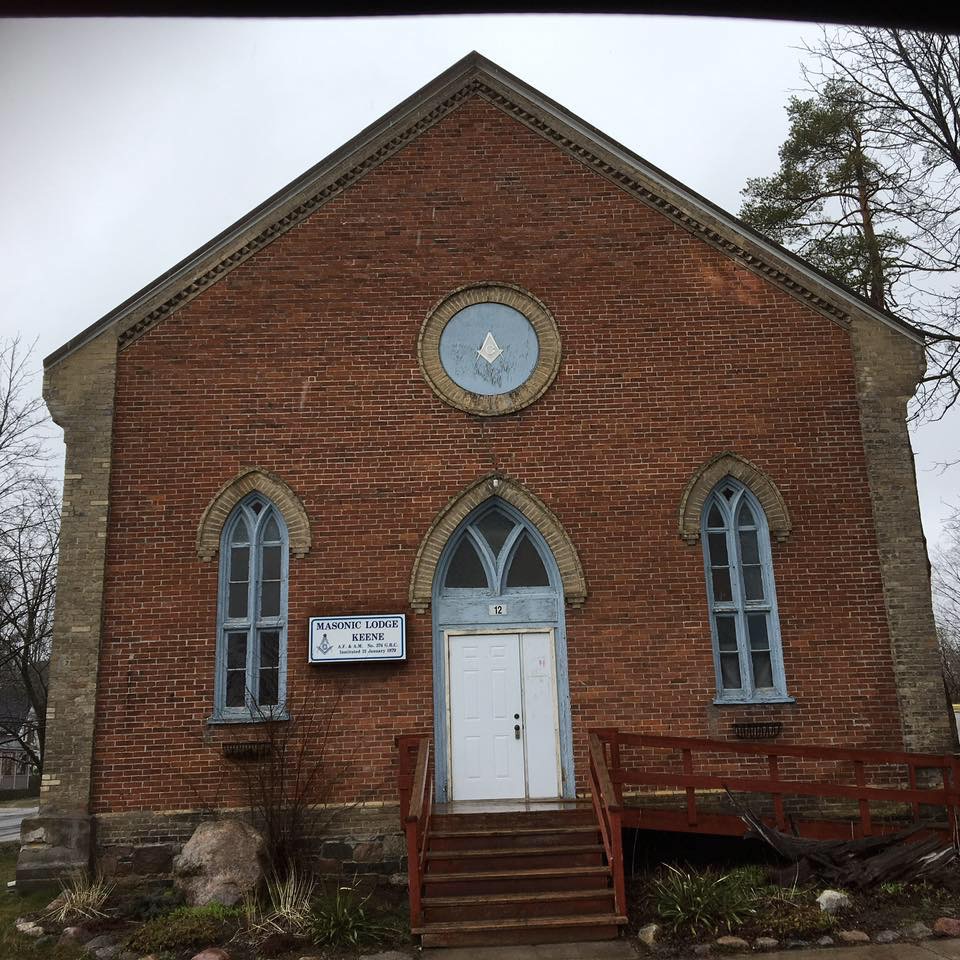 In June 2018, my husband and I purchased the little Masonic hall at 12 First street in Keene. I looked inside and saw immediately that it had a stage. This was built for the children’s library area but I had fallen in love with what I saw as a little theatre. I had always wanted a building so much so that my second child at 4 years old said he would someday buy me a building and fill it with groceries!
Our theatre group had started as The Brown Children’s Theatre in 1996 putting on productions in my living room and on stages in churches and on the third floor of The Gown and Gavel, a pub in Hamilton.

Once I discovered that I could rent the stage at The Staircase Cafe Theatre in Hamilton, I was ecstatic! My friend, Rita Mobarek who was performing as the Grinch (a musical) forgot her green makeup so The Cafe blended mustard and parsley for her face instead. The effect was priceless as were all the moments of bringing parents and their children together into a huge theatrical production. And that is how the idea of my own theatre began.
It also was the beginning of adapting classic plays and setting them to music.
When my Dad, Lyle Brown, was diagnosed with dementia in 2013 I moved to Hastings to be closer to my parents. I continued to produce shows renting space at The Warkworth Centre of the Arts and the Norwood Town Hall.
Since we started our play group I had invited casts from Hamilton, Cambridge, and Fergus/Elora to my parent’s fishing camp, Springbank Cottages for cast party weekends in the summer where the weekend would include performing for audiences in the little town of Hastings. I continued to do performances in Hastings at the Hastings legion, community centre, auction hall and even at the legion picnic. Our name changed (once again) to The Little Town theatre because of all the little towns we performed in.
I owe my love of theatre to my Mother, Myrn Jackson Brown who took me to shows at Stratford and Niagara on the Lake since I was a little girl. I would ‘make up plays’ with children in our neighbourhood and invite the parents to watch to make money to buy candy.
I’ve had a special place in my heart for Keene since I was a child. I went to McMaster University taking English and Drama and finished up my last two courses for my degree just after I had my fifth child in 2007 and took a directing course at Stratford.
Since he met me, my husband, Matt Pukarowski has supported my passion for theatre. After getting up at 4 am he still worked long hours once we purchased the building, helping me renovate to meet all the code requirements. Matt, Mom and I built the 39 legs under our stage extension in one night to meet requirements and this extension can now hold 100 people each weighing 100 pounds!
When we first purchased the building I decided to produce a Christmas play in Keene to introduce our theatre to the neighbourhood.
We couldn’t open to the public so I rented out space for auditions and practises in late September 2018 at the Keene United Church and produced How the Grinch Stole Christmas.

We continued to renovate and on Jan 17th 2019 I had auditions for Alice in Wonderland—a play that I had adapted and set to music. My daughter, Bethany Brown, a self-taught musician created music for two of Lewis Carrols poems in the production.
Growing up acting in the plays, Bethany soon took a more adult role at the Cambridge Centre for the Arts, working the lighting and sound and directing the music along with creating our new website  plus she will be performing as Honey in our May production of Who’s Afraid of Virginia Woolf. When Bethany was three years old she loved performing so much that she would jump onto coffee tables to sing!
We have always (for the last 23 years) started in mid to late September for a June production but our auditions for Alice in Wonderland didn’t even start until mid January 2019. Working with my new adaptation we still had to create the dances as we moved closer and closer to the performance date but the cast and crew and our orchestra band were incredible! We had three casts (and a fourth at Norwood High) as everyone worked together to bring new life to Lewis Carroll’s book.
Our opening cabaret was performed on February 22 2019. We were only partially open because we still had more work to do to pass the requirements.
Once we were partially open in mid February, I was able to bring the practises over for Alice to our own venue which helped a lot.

We weren’t allowed to have any public shows yet but we had a private St Patrick’s day event featuring musician Mike McCurdy.
We passed all the requirements at the end of April  and had our first public storytelling event, Sisters and Settlers, on April 26th 2019.
However, due to matters beyond our control we still were not given our liquor license.
So I decided to rent out The Lions Den (just down the road from us) so the musicians could still perform until our license came in. This lasted from April 5th to May 10th.
Our first event where we were fully officially open with a liquor license  in our own venue was for the band Chic ‘n Pot Pi on May 25 2019.
We had three performances of Alice in Wonderland on June 14/15th at our own venue and a fourth at Norwood High.
Matt and I were given the county of Peterborough award for Leadership in Art and Culture.
Here’s what’s happening in the new year:

Thursday Jan 9th 1 to 4 pm Sharon’s Cafe 2020 a daytime open stage offered every Thursday with Sharon Marie Doughty!
Friday Jan 10th, 7pm FunHouse Open Stage As musician, Mike MacCurdy explains, “The whole idea here is to bring area musicians/performers together to meet and play. There will be 2 fully-equipped music stages, one in the main theatre and one upstairs in the green room, which will be more spontaneous. All musicians and performers are welcome to step up on stage and sing, play, or just jam. Rock n roll band Five Mile Turn will be hosting the main stage and can provide backline accompaniment. Music makes the world go ’round, so give it a whirl and keep it spinning!”
Or just come out and listen to the music!
Sat January 11th Stockdale Central—a 5-piece band playing country classics and new country.
Sat January 25th ‘In Dreams’ by Ian Roy
A tribute to Roy Orbison!


Come on over and support our little theatre!!
(Please note: Space (upstairs and downstairs) can also be rented for your parties and events, workshops and group meetings. Reasonable rates that include a licensed bar, stage, concession, lighting and sound booth. The main floor is wheelchair accessible.